When Chelsea finally returned home Friday night at 12:30 she had good news.  She and her partner had won the debate tournament they had been in and she concluded, "We won! We're going to state!" I had driven them over and had listened to them practicing, so I wasn't too surprised.  They work so well together and they came up with a lot of answers to possible rebuttals.
They had practiced the night before at our house, too, and Dad argued against them to give them practice.  The subject for debate was "Income disparities in America are threatening democratic principles."  During several rounds they had to take either the pro or con side and defend it. They met a former nemesis who had not let Chelsea get a word in edgewise last time and Chelsea smilingly said, "I did that to him this time!"
I know I'd hate to have to argue against her.  I'm so glad she enjoys this and has found her niche. Sorry there are no pictures.
Posted by Luvmy9 at 7:50 AM

Luvmy9
Mother of nine amazing children, mother-in-law of four wonderful women, and grandmother of six precious children, married to an incredibly talented, kind-hearted man. I recently went back into the work place after thirty some years as a stay-at-home mom who even home-schooled for fifteen of those years. Life is always changing and I love it! 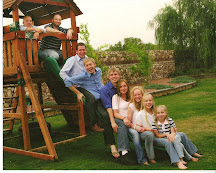